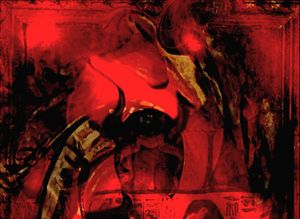 Remarkable in its lack of features, rather dull matte rust-brown color, maybe one centimeter thick by four centimeters wide and maybe half again longer, the rectangular object really becomes interesting when one picks it up. Not only is it heavy in weight far beyond what a terrestrial mind expects, it exudes a strange cold that causes your very bones to ache, yet it doesn’t seemingly harm the flesh. Some claim they hear a strange hum emanating from it, yet there has been no recorded evidence by any instrumentation to support such claims. In fact the object defies explanation by even the most rigorous rites that the tech priests subject it to.

Of course, there have been no tests performed on the object by tech priests, harlot seers, hex masters, or any other qualified or non qualified cogitari in more than five millennia. The object, called The Lot, is and has been in the private collection of the House Banáin for at least half a millennia. The Lot resides in a hyper secure vault that the paranoid Banáin bloodline use to hide their multitudinous sins from rival houses and the public at large. This night the slovenly patriarch of the family is ruminating on The Lot while undergoing a regular blood cleanse that allows his kind to appear human under the rites of genetic scrutiny.

The family members of House Banáin were once possibly human, but that has not been the case for many millennia. It is a sin they are fervent to hide considering their predisposition for persecuting any who stand in the way of their pursuit of amassing wealth and power. They promote genetic purity and loyalty to the state by way of force, defamation, and separatist policy. They are ruthless and highly successful. By their own definition, they would be considered mongrels were their genetics to be subjected to the very tests they use to evaluate others, as they long ago muddied their DNA with the strands from beings known commonly as the Magistra. It is, however, that very mixing of their DNA with that of the ancient Magistra space-farers that help them to hide their deviant genes.

The occasional infusion of pure human blood allows their genes to create a kind of gene-persona that most instruments of the cogatari class are incapable of discerning from actual genes, and which mask all vestigial markers from the ancient aliens that have combined with House Banáin DNA. In effect, most rites of genetic scrutiny reveal a member of House Banáin to have a direct DNA link to the distinguished House Of Martyrs who fought so ferociously against the Magistra in ancient times.

House Banáin also employs a number of deviant hex masters under the command of the   miscreant, Moldicius, a lapdog of House Banáin, who proliferates propaganda and injects aberrant coding rites into generally benign servitor codexes that perform a multitude of menial tasks. Moldicius considers himself a trusted advisor and confidant of House Banáin, yet this night his sweat drips down the small of his scaly back in a notable torrent of effluent stench, for this night Moldicius’s fear hangs like the heavy taste of rotting synthmeat in the back of the throat.

One of Moldicius’s deviant hex masters, Laste Ar Mhor, a spy masquerading as a member of the House of Dhran, was caught and then killed while in the custody of one, Jurist Shaym. That would generally be a minor inconvenience, resolved by the death and auto-triggered mental wipe that most hex masters are subject to when in custody of a Jurist of the Omnistras. However, this Laste Ar Mhor was actually a minor son of the Banáin bloodline, and while that in itself might deserve some careful doctoring of data to conceal his real identity and connection to House Banáin, this unfortunate son underwent Holy Confession after death… a procedure that can lay bare the hidden sins that House Banáin has so successfully kept concealed these many millennia…

Thus, Moldicius sweats as the Banáin patriarch brings The Lot near his now trembling form….

The post The Confessor – House Banáin appeared first on Mindspawn.