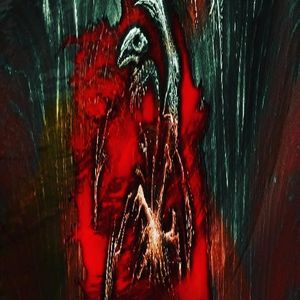 The place is like an organic womb, warm, sheltered, dark, the walls dripping with substance that is like reading an ancient text, visible yet obscure. Initially there is almost no light, and even with the optically enhanced remote viewer I can barely make out any significant features aside from the dripping substance that seems to be present.

I say seems to be because at one moment the datastream from my instruments seems to indicate a plethora of information and the next it is entirely void of any information, almost as if the sensors were not just off, but non-existant…. even in the off state the sensors should record no information, and that is information in itself. This is the utter lack of anything, even the negative of anything isn’t registering… sometimes. It is vacillating between the states of a highly unusual amount of data and what I can only describe as the inverse of that. Highly unusual.

I suspect that the sensors need tuning, and so I send calibration packets downstream to the instruments. Finally, after seeming aeons of time, I am now getting consistent, if not reliable, data.

The colors surprise me, rich vidid cataracts cover this void that I can now see is much larger than my data initially suggested. A lot larger… It’s almost like the entire area suddenly expanded exponentially. Actually it is… Expanding… Rapidly. The dousing probes can’t possibly be reading it correctly, but the visual data seems to agree. The probes glide into the void across a surface that shimmers like heavy dust blown by a feral wind. The shimmering twists and billows almost as if it has sentience, curious sentience.

There is a kind of sound that the probes are detecting, not real sound, as the void is a vacuum, but sound-like. What my instruments are decoding is something akin to… music…?

I need to do a full diagnostic. What I’ve been interpreting as data is in all likelihood just a malfunction or a series of malfunctions. A cascading error set that is rapidly eroding the banks of the datastream like a flash flood. Logic quickly crumbles when unobserved error(s) changes the data collection, interpretation, or both.

The calibration I thought I just ran is reporting it won’t run. It hasn’t even started. The probes are still indicating the void is rapidly expanding, and the music, well it sounds more and more like some abstract music created by a mad composer being fed into a ravenous recycler. Not quite noise, as I’m discerning a vague pattern, and it is oddly cloying, like the scent of death… initially attractive and then quickly repulsive.

My species is far more adept in the visible spectrum than compared to the audio spectrum, more so when there shouldn’t be any audio spectrum in the first place. As the image starts to coalesce my lagging auditory decoding is finally making sense.

I do not recognize this word, geshetica…. I have no reference to such a word in over a hundred million languages…. but I understand it.

Welcome… and now I am no more….