CHILDREN OF THE WYRM 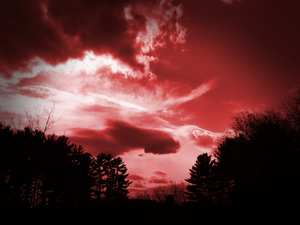 The skies boil as their fires scorch the air. Rarely visible save to those who shall see no more, you can sometimes catch a glimpse from afar, a curved sinuous plume, or a long neck stretching into the sky… But today you can see them everywhere, they are restless, perhaps hungry, or maybe it is as they say in ancient tomes of forgotten knowledge and they are again migrating. A pang sits solidly in my belly that I never knew of a time without these creatures, even though as a youth the air was breathable, even refreshing, and nearly all lived above ground… but that was long ago, and today we hide from the dark smoke, the burning skies, and the acrid air.

We were listless, apathetic, and even though we saw it coming we did not understand the implications of the Great Migration… we were so secure in our knowledge, in our superiority and arrogance, and so we watched in disbelief as the world we knew, the world that old dreams had been built on, crumbled. Assumptions of weaknesses were dashed and exposed for the gross underestimation that they were. We had roused a great force, one we saw, but never believed was coming, even while watching its slavering jaws consume everything in it’s path. At last, sitting amongst the ruins of a world devastated by ignorance and disbelief we learned the cold reality of what we had allowed to happen, and worse, what we had done.

It would take us years to come back from that brink of near annihilation, years of desperate struggle, years of bitter battles fought as much with ourselves as our adversaries, to finally begin to venture forth again, to learn how to live again in this new milieu… and we did… It is a new world, to be sure, one which we helped to create, we helped to define, and for better or worse, a world we must adapt to or die. Even now, our kind infiltrate the lairs of the Others, we have become so much like them, nearly identical except for the fear… And we fear aplenty… but as we lay down amongst them, as we lay with them, we hope the offspring of our union might usurp the throne of ignorance we have built, to become the Children of the Wyrm….